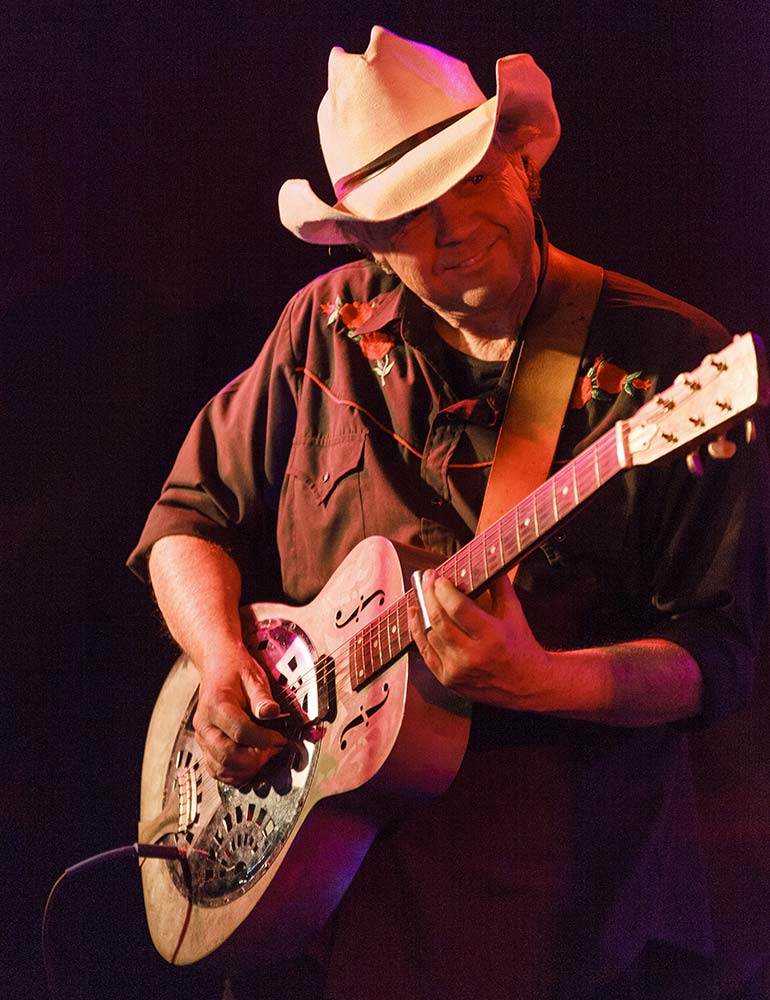 Jeff is a Perth-based guitar player who has been with The Western Suntones since their inception in 2009. Jeff plays acoustic and electric guitar, dobro and mandolin. He writes some of the band’s songs and is a vocalist as well.

Jeff has a pedigree in the local music scene stemming from the Perth’s golden years of the 1970s and 1980s. He was in Kicker, The Jaywalkers, the Bayou Brothers, The Honky Nuts, Reckless Kelly, Rogue and was a guitarist with the Lee Sappho and Steve Tallis bands. In 2019 he featured at the the inaugural guitar festival in Margaret River in a homage to the artist JJ Cale.

Jeff’s eclectic guitar playing draws on many influences from the south of the US. Some of his more obvious influences are Ry Cooder, Jorma Kaukonen, Jesse Ed Davis, Leo Kottke among others. He was also taken with the local bands Road Band and Duck Soup in the 1970s and has been involved in music ever since. 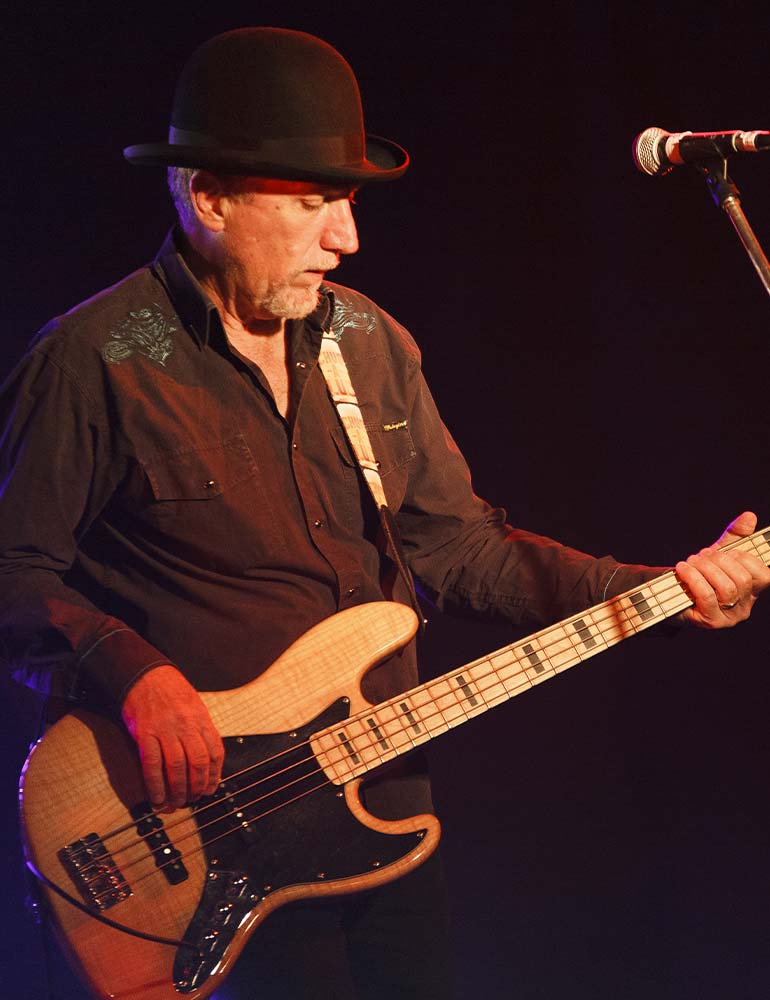 He hails from NSW originally but has lived in WA since he was ten so he’s almost a real sandgroper. He started out in the 1970s in a band called Starchild, playing on Perth’s Telethon, moved to a band called Details playing in people’s backyards, and has been going downhill ever since.

Chris has played in original bands (The Textures and Under One Roof), 50’s rock n roll (The Rocking Avocados), blues bands (The Moneymakers, The Grasscutters, The Swamp Riders, Tin Dog, The Studebakers, The Bayou Brothers, The Blue Devils), jazz bands (The Harbourside Jazz Band), The Australian Army Band in Darwin and finally found his natural groove in country bands (Coachwood & Co., The Karen O’Shea Band, The Western Suntones).

Unusually for a bass player, Chris has managed to stay married for a considerable time, with neither his wife, daughter nor dogs leaving him for someone else … or dying. Hence Chris considers himself a failure as a country artist.

Chris is a lover of music. Full stop. Growing up with Louis Armstrong & Glenn Miller-loving parents, hearing Johnny Cash and Marty Robbins on the radio as a youngster, being seduced by The Devil in the guise of 70’s Australian pub rock when a teenager, discovering Blues when hungover through most of the 80’s, there are a lot of influences to unwrap there. But the fundamental “3 chords and the truth” style of country music is where Chris has found his home. 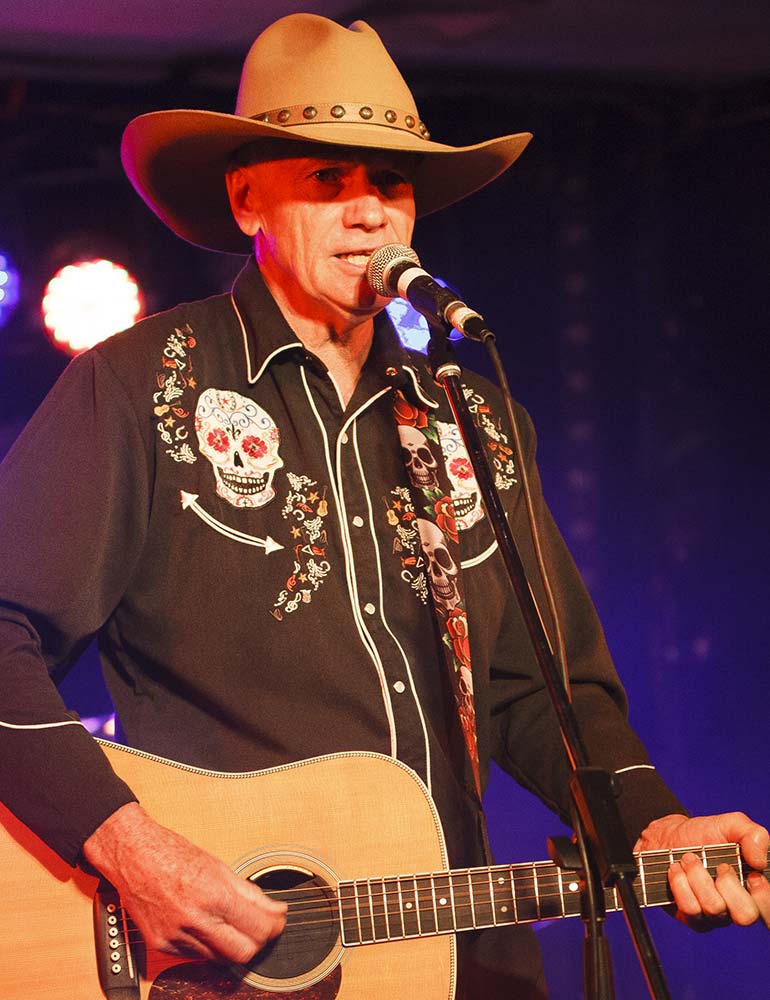 Steve is a singer and guitar player who crafts songs around stories of life, love and longing.

As a young boy he heard ‘Satisfaction’ blasting out of his Dad’s FB Holden valve radio and was instantly hooked. Over time he was exposed to a cocktail of musical genres from rock to country, blues and folk. This inspired him to learn guitar, to sing and to eventually write his own material.

Steve played in a mixture of bands from the mid-‘70s to the late ’80s, learning about performance and songwriting. He has a strong commitment to original music and though his musical career has involved the odd totally cover band, he is most comfortable playing his own music.

Steve has played in The Links, The Textures, Under One Roof, The Rocking Avocados, The Mirror Kracked and Sheiks Alive. In the early 2000s he was part of Los Duos. Steve has been one of three core members of The Western Suntones since 2009.

Playing in The Western Suntones enables Steve to be involved in a creative process and to develop songs which combine the elements of country, folk, and rock which has now been labelled Americana. Steve says: “We don’t take ourselves too seriously, we try to have fun and ride out the inevitable road bumps presented by the music industry and being in a band.”

Steve is happily married with two adult daughters, three grandchildren, two horses, a cat, a dog and lives in a rural suburb south east of Perth. He will keep striving for that great song and his dream is to create a song that will last and will reach people as only music can.